The characteristics of muons 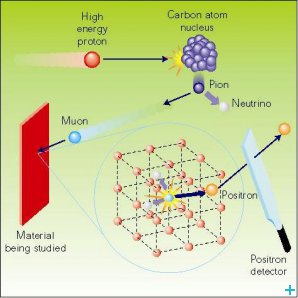 The life of a muon

The life of a muon at ISIS and PSI

The muon is an elementary particle similar to the electron with a unitary negative electric charge and a spin of ½. It is an unstable subatomic particle with a mean lifetime of 2.2 µs, compared to that of a free neutron (~15 minutes), a free proton (greater than 6.6×1033 years, possibly infinite), and that of an electron, also possibly infinite.

Muons have a mass of 105.7 MeV/c2, which is about 200 times the mass of an electron. Since the muon's interactions are very similar to those of the electron, a muon can be thought of as a much heavier version of the electron.

For materials studies, it is mainly the positive muon that is used. When implanted into materials, positive muons can be thought of as acting a bit like light protons (they have the same charge as the proton, and are about 1/9 the mass of a proton).

How are muons produced?

Muons are produced from the interactions between an energetic proton beam and a light-element target. The proton collisions produce pions, which decay into muons. The muon beam produced can be 100% spin polarised – i.e. all the muon spins are pointing in the same direction (the polarisation direction is anti-parallel to the muon's momentum direction). This is a key feature of the muon technique, as it is what happens to the muon polarisation which we observe in muon experiments.

The muons are implanted into the material under investigation, where they come to rest. Local magnetic fields, for example from near-by magnetic atoms, cause the spin of each muon to change direction. By watching what happens to the muon spins, we learn about the muons’ local environment and hence about how the atoms are behaving in the material.

The life of a muon

After an average lifetime of 2.2µs, each muon decays and emits a positron. The decay positrons are preferentially emitted in the muon spin direction – they are detected, and tell us about how the muons' spins were behaving in the sample. This in turn tells us about the muons' environment – so we can learn about the atomic level magnetism, for instance, in the sample.